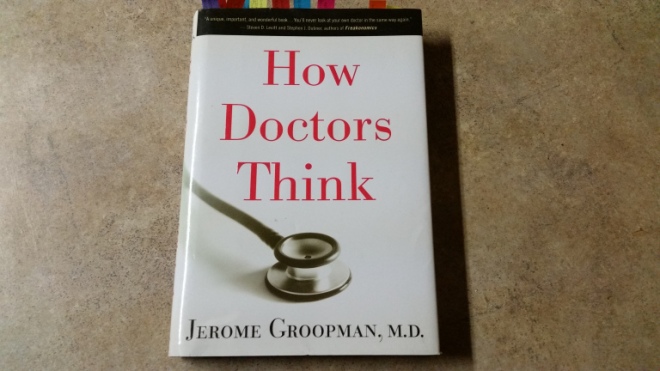 There are doctors that follow the tune that the Medical Industrial Complex plays, and there are ones who buck the trend.  Dr. Groopman is one of the latter, thankfully.

In How Doctors Think, The New Yorker staff writer and Harvard professor of medicine & researcher Dr. Groopman offers a distinctive look into the structure of Big Medica in search for what exactly is the type of mindset Doctors employ when practicing their jobs.

Groopman does a compelling job throughout the book in making sure he relates the plights plaguing medicine from both sides of the coin, from the patients perspective, as well as from the perspective of a physician.  This aids in the book not being one sided.  It helps greatly that he’s also a Doctor with experience in this very field.

From medical, money, marketing, uncertainty, dogma, to various other components of medicine, Groopman attempts to turn over as many stones as possible in his search for what issues are the ones plaguing Doctors the most.

A notable point in the book that hit close to home, which many people will relate to is the emotional tension that can arise at times between patients and their doctors.  Essentially, whether patients and doctors like each other.  Groopman relates what Social Psychologist, Judy Hall discovered regarding emotional tension:

“..that those feelings are hardly secret on either side of the table.  In studies of primary care physicians and surgeons, patients knew remarkably accurately how the doctor actually felt about them.  Much of this, of course, comes from nonverbal behavior: the physician’s facial expressions, how he is seated, whether his gestures are warm and welcoming or formal and remote.  “The doctor is supposed to be emotionally neutral and evenhanded with everybody,” Hall said, “and we know that’s not true.”[1]

“…that the sickest patients are the least liked by doctors, and that very sick people sense this disaffection.  Overall, doctors tend to like healthier people more.”[2]  So much for quality health care.

Along with the above example, the author additionally notes many other examples of issues that arise due to a crisis in communication which can arrive in myriad ways.

In fact, one of these issues that Groopman relates is that:

“…on average, physicians interrupt patients within eighteen seconds of when they begin telling their story.”[3]

Another salient aspect of Big Medica that the author sunk his teeth into was the psychological aspect of medicine.  Predictably, far too often doctors/western medicine view the patients psychological components as being apart from the body, rather than taking a much-needed holistic approach.

Additionally, the institutional dogma that reigns down from the top is also touched upon in a few instances by the author.  Open-mindedness is scoffed at, while conformity was expected.

Recounting an example of choosing between the availability of multiple medical options regarding a particular treatment, Groopman relates something noted by physician Jay Katz, who taught at Yale Law school at the time:

“In both [treatments]…we were educated for dogmatic certainty, for adopting one school of thought or the other, and for playing the game according to the venerable, but contradictory, rules that each institution sought to impose on staff, students and patients.”[4]

Another disturbing component that doctors acquiesce to that is covered by Groopman is how doctors far too often give into to corporate interests.  This very issue has covered by other doctors such as Dr. Brogan, Dr. Breggin, Dr. Mercola and many others.

This book sheds much needed light into the inner workings of how doctors operate – how they think.  While the author notes that a sizeable amount of the issues have a variety of roots at the outset, such as communication, what he conveys still leads to much concern within the Medical Industrial Complex.

In the end, individuals will need to become much more proactive/responsible in their health if they plan to breakaway from the conventional medical system that puts profits over people.

Zy Marquiez is an avid book reviewer, an open-minded skeptic, yogi, and freelance writer who regularly studies subjects such as: Consciousness, Education, Creativity, The Individual, Ancient History & Ancient Civilizations, Forbidden Archaeology, Big Pharma, Alternative Health, Space, Geoengineering, Social Engineering, Propaganda, and much more. His own personal blog is BreakawayConsciousnessBlog.wordpress.com where his personal work is shared, while TheBreakaway.wordpress.com serves as a media portal which mirrors vital information usually ignored by mainstream press, but still highly crucial to our individual understanding of various facets of the world. My work can also be found on https://steemit.com/@zyphrex. View all posts by BreakawayConsciousness