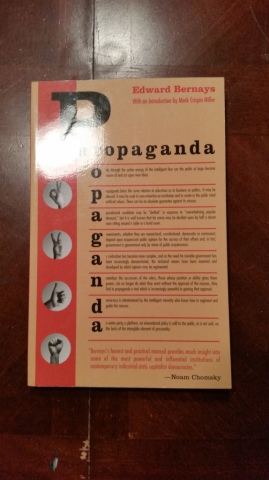 “Bernay’s honest and practical manual provides much insight into some of the most powerful and influential institutions of contemporary industrial state capitalist democracies.”
– Noam Chomsky

“Propaganda is the executive arm of the invisible government.”
– Edward Bernays

Propaganda is a tool widely used by those holding positions in many facets of society, from politicians, religious leaders, agents of the state to corporate brass.

Edward Bernays, whose magnum opus is Propaganda, is considered “the father of public relations. This particular book outlines in profound detail many aspects of how propaganda works. This book was originally published in 1928, and yet its effects can be still felt today.

This particular piece of work is dynamic because this book details how the mass manipulation of the human subconscious can place can take at unprecedented scale.

In a world where the propaganda vice-grip has reached unfathomable levels, knowledge of the form in which this takes place is not only imperative, but an individual responsibility.

Although glossed over by many, propaganda in its many forms – news, tv shows, songs, radio stations, advertisements, magazines, and more – has become an undeniable part of our societal structure.

Webbing the populace at will, this tool, and all its functions, have served to greatly increase the influence/power of most individuals and institutions spreading it.

“Bernay’s trailblazing marketing campaigns profoundly changed the functioning of American society. He basically created “consumerism” by creating a culture wherein Americans bought for pleasure instead of buying for survival. For this reason, he was considered by Life Magazine to be in the Top 100 most influential Americans of the 20th century.”1

Propaganda, in it of itself, is not negative per se. However, if lies are embedded within the messages being shared, then this tool can have very nefarious and wide reaching consequences for entire populations.

The book’s strength lays in showcasing the methods being studied by Bernays nigh a century ago, and how those methods were or might be employed.

Simply stated, if one wishes to understand how the rulers of our time operate and how they use and extend part of their power, then Propaganda is for you.

Personally, this book should be mandatory for anyone’s education. Only by knowing what you face and how it is employed can one learn how to overcome it.

To sum up this work, it is best to leave you with this Orwellian quote by Bernays:

“The conscious and intelligent manipulation of the organized habits and opinions of the masses is an important element in democratic society. Those who manipulate this unseen mechanism of society constitute an invisible government which is the true ruling power of our country. …We are governed, our minds are molded, our tastes formed, our ideas suggested, largely by men we have never heard of. This is a logical result of the way in which our democratic society is organized. Vast numbers of human beings must cooperate in this manner if they are to live together as a smoothly functioning society. …In almost every act of our daily lives, whether in the sphere of politics or business, in our social conduct or our ethical thinking, we are dominated by the relatively small number of persons…who understand the mental processes and social patterns of the masses. It is they who pull the wires which control the public mind.”