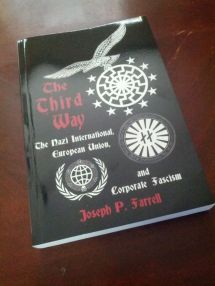 [Editor’s Note]
This review was posted on Amazon a few months back by me upon reading the book.  Thought it would be prudent to share given how vital Dr. Farrell’s work is to understanding our current paradigm and much of what goes on behind the scenes.

As a preamble, have had the pleasure myself of reading 20 of Dr. Farrell’s books in the past, and they have all been as thought-provoking as they have been deep in scope. Not only do his books dovetail with each other rather smoothly, but they each bring a different [yet much needed!] flavor to alternative research, and his work is starting to get recognized by independent researchers and individuals that are searching for answers to questions in our paradigm/s that the mainstream culture [and even alternative media as well] is not covering, and sometimes downright suppressing.

Mr. Farrell’s new magnum opus, ‘The Third Way – The Nazi International, European Union And Corporate Fascism’, picks up where his previous work, ‘The Nazi International’ left off. In usual Farrell fashion, he interweaves a variety of different facts, documentation and theories to solidify the fact that Nazism 2.0 [modern day Nazis] are not an outgrowth of the preview generation, but a continuance of the Post-WW2 Nazi ideology that plagued humanity decades ago.

As a particular document that Mr. Farrell cites says, “For us” – The Nazi International “The war never stopped.” When taken in conjunction with the fact that no representatives from the Nazi party ever formally surrendered, you can catch a glimpse at the innerworkings of the mentality being showcased that would drive Nazism 2.0 to the 21st Century.

This particular books is extremely vital in understanding the current breath and latitude of some of the wider/dire issues that are affecting society today – mainly fascism/corporatism/Nazism – and how those have spawned the seeds of what is now the European Union, with Germany at the tip of the spear so to speak.

Trenchantly, Mr. Farrell covers how the Nazis were able to extend their sphere of influence throughout different countries/agencies/etc and how that not only lead to technological/currency cartels, with I.G. Farben’s ghost at the forefront and the BIS coupled along, but also to the creation of the cosmology cartel known as CERN.

Would love to expound more on the aforementioned subjects, but that would be doing a disservice to Dr. Farrell’s work.

If you have read any of his previous work, you will greatly enjoy this piece immensely. And if you haven’t, it’s not a bad place to start as this particular book, more so than any other, is vital to comprehending certain aspects of issues that are everpresent in our society today, and will continue to plague us until something is done about it.

Really hope that helps anyone on the fence that is pondering getting this book.