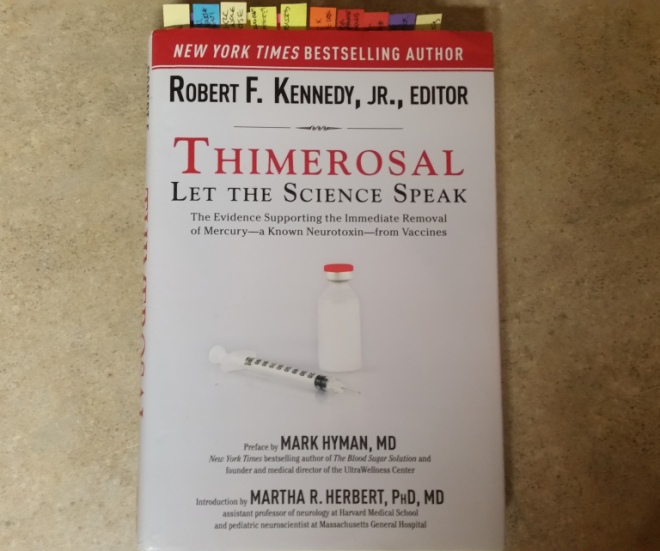 “When vaccines contain the potent toxin mercury , they can harm public health while they protect it. This is a serious paradox and an error.  I hope and implore that this book’s overwhelming scientific evidence moves us all to do whatever it takes to correct this error, because it is unnecessary, and it CAN and MUST be corrected.”
– Martha R. Herbert, Ph.D., MD, Assistant Professor Of Neurology At Harvard Medical School & Pediatric Neuroscientist At Massachusetts General Hospital

“One can be uncertain about the adverse health effects of ethylmercury in vaccines and, after reading Mr. Kennedy’s captivating and extensive documented book, still be persuaded beyond a reasonable doubt of two things: the neurotoxicity of ethylmercury, even at low doses, is indisputable; and given the existence of alternatives, the intentional exposure of humans to mercury in therapeutics must be prohibited.”
– Sheldon Krimsky, Ph.D., Lenore Stern Professor Of Humanities And Social Sciences, Tufts University; adjunct professor, Department Of Public Health & Community Medicine At Tufts University’s School Of Medicine

The subject of vaccinations – perhaps more so than any other in society – has an overwhelming polarizing effect.  It’s quite unfortunate because there are a lot more than just two sides to the issue of vaccinations.

The establishment would like people to believe there are only two sides to the issue, the pro-vaccine and anti-vaccine sides.  That’s because it makes it simpler to control the populace when most people fall for the illusion of there just being two camps.  This is classic use of the left-right paradigm, which has countless permutations and uses for the establishment.

In any case, as someone who is a great advocate of informed consent, this book resonates quite well with me.

The reason is because although Big Pharma/Big Medica espouses that vaccines are safe, the evidence that has been accumulated by this author and countless other researcher over time indicates otherwise.  That alone pulverizes the fantasy that most people are being informed of all potential data/issues by Doctors and the medical establishment.

Thimerosal – Let The Science Speak – The Evidence Supporting The Immediate Removal Of Mercury – A Known Neurotoxin – From Vaccines by Robert F. Kennedy, Jr. carries out a veritable multi-pronged evisceration of all the flawed data that has been orchestrated regarding Thimerosal’s alleged safety by Big Medica & the establishment.

Citing hundreds – yes, hundreds – of data points, Kennedy shows more than ample evidence as to the numerous dangers of vaccines with the preservative Thimerosal, even at low doses.

Not only that, but the author cogently shows the science behind why Thimerosal has been classified as a neurotoxin.  That’s the bad news.

The good news is that fortunately it not hard for the removal of Thimerosal to take place.

Coupled with that author also makes a sound argument that changing vaccines to single-doses rather than using multi does would actually end in the elimination of the preservatives 2-PE and Thimerosal.  Furthermore, as the author states, the cost-effectiveness of single dose vaccines compared to their counterparts , could also be superior.

In conclusion, individual health should ultimately be the choice of the individuals and parents, and not something to be rammed down people’s throats by the state.  To that effect, this book destroys what conventional scientists have been espousing for decades – that Thimerosal is in fact safe.

As the book showcases, nothing could be further from the truth.

Whether or not people are for/against vaccinations, EVERYONE should be pro-education, and this book helps do just that – educate people about the many dangers of the neurotoxin Thimerosal.

Parents, teachers, doctors, nurses, reporters, politicians et al. should read this book in order not only to become cognizant of the notable dangers of Thimersoal – which include brain damage and countless other issues, among other things – but to come to terms with the fact that we as a society have been lied too for so long, it’ s time to put ignorance to rest.  After all, the health of your loved ones is counting on it.