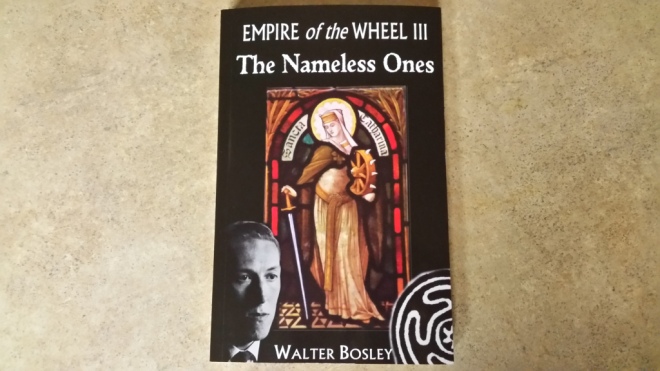 While all three installments delve into those who pay homage to the wheel, which is a symbol of the ever-present Hekate, also known as Catherine of the Wheel, part three of this series, just like the previous ones, has a slight different flavor and with good reason.

This particular book begins as the others do, posing rather poignant questions as the author ruminates ‘out loud’ into what might have taken place in the early 20th century in respect to the ritual murders he analyzes, what possible reasons there could have been behind those nefarious incidents, how they dovetail into each other, as well as where they all lead to in modern times.

That last point should be of at least slight interest: modern times. This issue of those who have carried out these occult incidents isn’t something that only resides in the past. In fact, the latest San Bernardino Shooting has many ‘synchronicities’ with the older events that the author has attempted to solve, and has shed light to.

This particular book merges many notable subjects, such as Telluric fields, the infamous Hekate, ritual killing, Mt. Rubidoux even the mysterious.Mission Inn,

Other more unexpected aspects such as the work of H.P. Lovecraft and what the author possibly knew as well as who, are covered in detail.  Knowledge of ancient history are covered where pertinent and the author also connects some other individuals to buttress the argument that there was extremely nefarious dealings taking place in honor of the wheel and all that it entails.

The book even hearkens back to people presented in the past such as Crowley, Harry Houdini, the Sundance Kid, and the Zodiac killer, but adds additional layers within each in its examination of how each of those people were possibly connected.

Out of all three books, this particular one does the best job of dot connecting with some rather keen support for his research. That’s not to say the other books weren’t outstanding as well as grounded, because they were, its just that this book had more information to rely upon than the previous installments.   One can only do so much with the information supplied, and with that the author has done quite the superb job considering the circumstances.

All in all, the author’s search into who The Nameless Ones are, follows a rather abstruse road mostly untaken before, but which leaves readers aghast at the possibilities when all is said and done.

From ritual murders, to ancient civilizations, to more modern occult sacrifices of rather notable subjects, the book leaves no stone unturned. And as stated before, those who follow these type of beliefs, are still around today.